Few days ago I saw some of these pictures from Tom Seest and was amazed by his remarkable weight loss using a Keto Adaptaion Diet. I asked Tom to share his weight loss story with eMaxHealth.com reader as an encouragement. Here is Tom in his own words.

My name is Tom Seest, and I just turned 50 years old this month. I live with my wife and four boys in the country just north of Edwardsvile Illinois. 17 years ago, I injured my back falling down some stairs, and completely gave up exercise. I had always been active before that, but still 50 to 70 pounds overweight. After giving up exercise entirely, I quickly ballooned to well over 500 pounds. I know it was over 500, as I couldn’t find a scale that would weigh me. The biggest scale I found was 500 pounds. As a computer programmer, I spent most of my time sitting, and really didn’t get any exercise other than casual walking.

I never had any health problem from my excessive sugar intake, or my lack of exercise until I started driving 3.25 hours per day on a commute. I would get home from my commute and my knees would feel like they were on fire. The last straw for me was when I had to have my boys help me take my socks and shoes off after I hobbled into the house from the commute. At that point in time, I was barely functional. 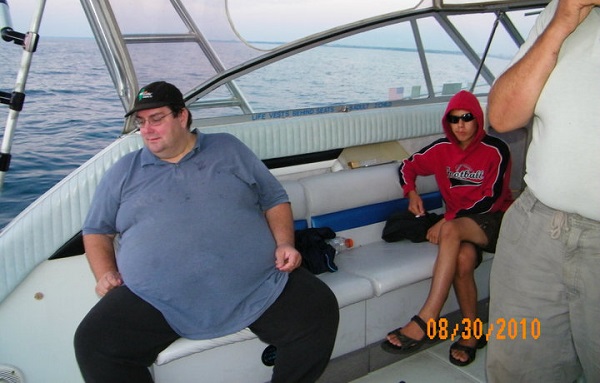 Fortunately, I could still remember the days when I was fairly active. I really enjoyed bicycling, and I knew it was good for the knees. So, I set my sites on bicycling again. I began to diet in 2009. I started with a straight Atkins diet, and dieted my way down to about 490 pounds by the end of 2010. In early 2011, I started logging my food intake and limited exercise into MyFitnessPal. I tried various combinations of low carb, low fat, and calorie watching diets. On April 6th, 2011, I took my first bike ride and went 2 miles. By the end of the month, I was up to 20 mile rides. I logged my rides on DailyMile.com and use an app called CycleMeter. Since then, I’ve logged 20,400 miles, and have ridden all over the US and in many other countries. I’m not a bicycle racer by any stretch, but I’m a strong rider, and I prefer to tour on the bike.

After trying various diets, I finally found that way of life that suits me the best. I’ve settled on the Low Carb High Fat Ketogenic diet. I learned about the diet after reading books like “The Calorie Myth” by Jonathon Bailor, “The Big Fat Surprise”, and many others. I also listened to various podcasts that explained the benefits of the Ketogenic diet for endurance athletes. This led me to adopt this diet right before the holidays in December of 2014.

I like the Keto Adapted lifestyle, as I’m no longer hungry and can experiment with the benefits of Intermittent Fasting. I’ve been in Ketosis most of 2015, and have lost 63 pounds this year. I’m currently hovering around 310 pounds. I still have to lose anywhere from 90 to 130 pounds, but I have no idea what my ultimate weight will be. It’s been so long since I’ve been that skinny, that I have no idea how I will look.

I feel great at my current weight even though I’m considered morbidly obese at my height of 6 feet. I can go ride 20 to 40 miles per day on my bike and enjoy every minute of it. I’m more active now than I was even in my 20’s.

In 2010, I remember taking a land and sea tour on the Island of Tortola with my parents, when we were in port on a cruise ship. My mother took a picture of me on 10/24/2010 at a bar in the town of West End. I remember seeing that photo and thinking that I still had a long way to go. On 10/21/2015, my wife and I rode our bicycles 21 miles round trip from the cruise ship dock in Road Town, and my wife took another photo of me in that same bar. I like looking at that new photo in contrast with the old photo, as it reminds me of how far I’ve come and how much I’ve lost. In any case; I’ve truly enjoyed the journey…